GoDaddy Outage – The Effect on Your Internet Business And The Lesson 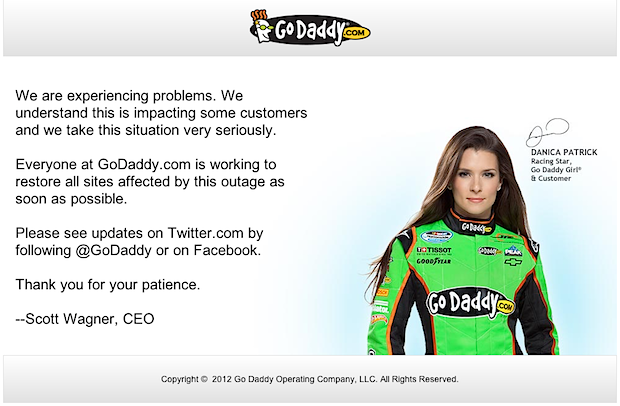 Are you a small business owner on the Internet? Where you affected by the recent GoDaddy hacking? As bad as it may seems to be for your business (especially small business owner) there is vital lesson to learn in this experience.
First of all, I want to extend my condolences to all GoDaddy customers who suffers the outage presently going on. Condolences because I know how hard it can be seeing your precious site down even for a minute. I’m just fortunate to be out of this — But I once suffered the same fate with Dynadot early this with their DNS.
GoDaddy.com the acclaimed number one Domain Registrar and Web hosting company, went down on Monday, 10th of September, 2012 — taking alone with him an untold number (probably millions) of websites of small business owners around the world.
A person who claimed to be affiliated with the popular hacking collective Anonymous — named @AnonymousOwn3r on Twitter — claimed responsibility for the outage for reasons not quite disclosed at when I write this post.
He/She simply state in a Twitter status update: “I’m taking godaddy down because (sic) well i’d like to test how the cyber security is safe and for more reasons that i can not talk now,” he wrote in response to questions directed to him/she by a technology reporter at Mashable who tried to find out the reason behind such a attack.
The attack appeared to have taken down websites that use GoDaddy servers to host their information as well as those that have registered their domain names with the company which makes it an expensive attack by all standard because it takes a lot to take the entire server system of a web company as big and expensive as GoDaddy down.

GoDaddy says it is the “largest hosting provider of secure websites in the world.” But the question now is: How secure are they themselves? “The more problematic part is that any domain registered with GoDaddy that uses its nameservers and DNS records are also down,” according to Mashable’s report. That means that even if you host your site elsewhere, let’s say on Rackspace and using GoDaddy  DNS will mean that your site is inaccessible as well.
GoDaddy, which says it currently hosts over 53 Million domain names, in a Twitter update acknowledged the outage but did not comment on the cause of the almost complete system failure.
The company simply posted “Status Alert: Hey, all. We’re aware of the trouble people are having with our site. We’re working on it,”
In apparent frustration, one GoDaddy customer write on Twitter “It is not just your site, It is EVERYTHING anyone has hosted with you…. from email to websites….”. That painted the picture of how back the attack really is.
Later on, GoDaddy also apologized to its customers on yet another Twitter update. “So many messages, can’t get to you all… Sorry to hear all your frustration,” the company said on Twitter. “We’re working feverishly to resolve as soon as possible.”
Up till this moment I’m writing this, it is still unclear if the servers have been restored.

Now what are the lessons for business owners?

It’s simple – Never to put your eggs in one basket, no matter how reliable and strong the basket seems to be! If possible, back up your entire site every six hours!! What if the attack goes dipper than we can imagine right now — possibly as far as affecting your servers and destroying your files? What if the attack stays for days or even months with GoDaddy unable to find solution?
While these scenarios may not be entirely possible, it is also good to think the impossibles sometimes. After all, do you and I possibly imagined that a company as big and reputable in terms of Internet security like GoDaddy would be hacked beyond remedy for hours?
If you have your site’s most recent files (as recent as 3hours) backed up somewhere, I don’t think you’d waste a second uploading it in another server — would you?
The Internet we live in today is becoming more and more secured, no doubt about that — but that has not removed the fact that it is also hackers and spammers den. Therefore, precautionary measure is always the way to go — back up your site at least every day.